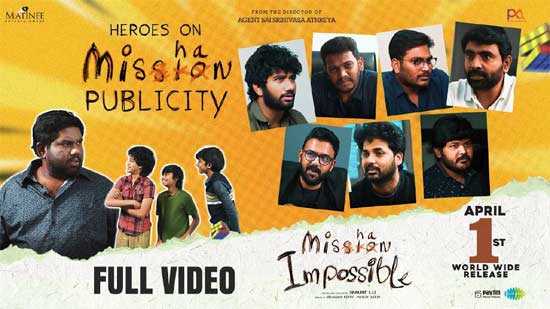 Director Swaroop RSJ who scored a solid hit with Agent Sai Srinivasa Athreya in 2019 is coming back again with another movie titled, Mishan Impossible. Bollywood actress, Taapsee Pannu is playing a crucial role in this movie.

The makers have commenced promoting the movie and released a promotional video featuring Harsha Chemudu and the key characters from the movie, Harsh Roshan, Bhanu Prakshan and Jayateertha Molugu.

The video has showcased the trio meeting several Telugu directors – Tharun Bhascker, Bharat Kamma, Vivek Athreya, Sandeep Raj, Vinod Anantoju and Venkatesh – to promote their movie. The makers refused their request as the spelling of the movie is incorrect. Finally, the fed-up trio decided to kickstart the promotions with a trailer.

The fun-filled video has revealed that the theatrical trailer of the movie will be out on March 14, 2022. The makers haven’t announced the time. Produced by Matinee Entertainment, the movie has Mark K Robin’s music. Mishan Impossible will hit screens on April 1, 2022.