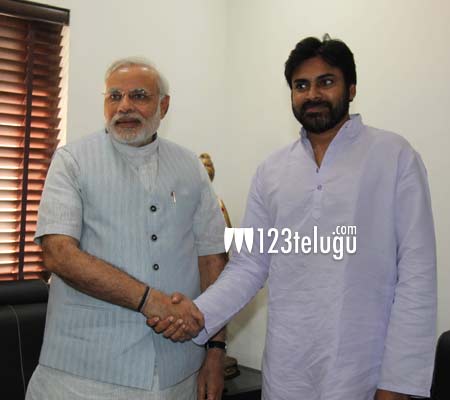 As India is all set to get its 8th prime minister, Narendra Modi is busy thanking all his supporters and party workers who had supported him in winning this elections.

The BJP tied up with TDP and had swept the Seemandhra elections completely. Major cause for this was the Modi wave and also the aggressive campaign which mega power star Pawan Kalyan did for the party.

Modi was so thankful to Pawan that he took to twitter and expressed his views “I want to express my gratitude to Pawan Kalyan Garu for his enthusiasm & support through the campaign across Andhra Pradesh” tweeted Modi.

Pawan Kalyan has become the centre of attraction in the state in this 2014 elections. He launched his political outfit but did not contest the elections. And now with the backing of TDP and BJP, there is no looking back for Pawan Kalyan in the future.