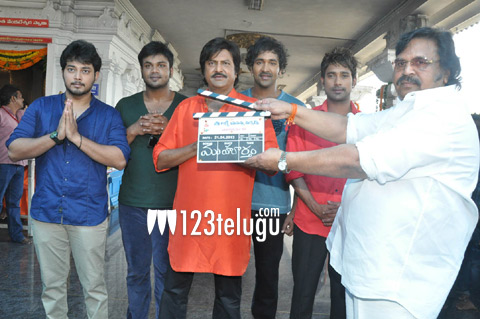 Mohan Babu, Vishnu Manchu and Manoj Manchu are teaming up for the first time for an untitled multi-starrer film. Varun Sandesh and Tanish are also playing lead roles apart from Raveena Tandon, Hansika and Pranitha Subhash. Two more actresses are going to cast in this film. Srivas, who had earlier made Lakshyam, is directing the film and it’s going to be produced by Vishnu and Manoj. The film was officially launched today in Hyderabad and the entire Mohan Babu’s family graced the event along with Dasari Narayana Rao, Lavanya Tripathi, BVS Ravi, Gopi Mohan and Kona Venkat among many others. Talking about the film, Mohan Babu said, “I am playing a lead role after a very long time and all of us are quite confident about the film. I had seen Lakshyam and I was quite impressed with the way Srivas had made that film. I thank all the co-stars in the film who agreed to act in the film.”

Kona Venkat stated that the film will be 100 times better than Dhenikaina Ready and that the script has shaped up quite well. The film’s first schedule is going to begin in Europe and initially some songs are to be canned on the lead cast. M M Keeravani is going to score couple of songs and the list of music directors also includes Bappa Lahiri, Achu and Baba Sehgal. Marudhuri Raja has written the dialogues and , BVS Ravi, Gopi Mohan and Kona Venkat have worked on the script. Palani Kumar is the cinematographer.