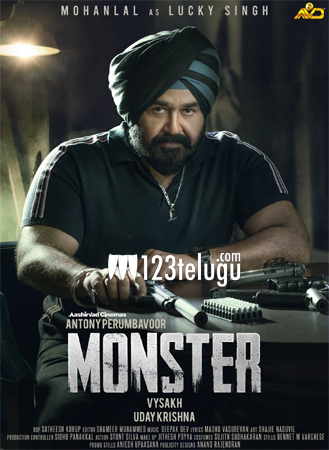 Dressed in a black t-shirt and a black turban, Mohanlal is seen holding a gun, with bullets lying on the table. The Complete Actor is buzzed to be playing a ruthless cop in the movie. Monster is produced by Antony Perumbavoor under Aashirvad Cinemas banner. The film’s shooting has begun today. Apart from this project, Mohanlal also has Prithviraj Sukumaran’s directorial, Bro Daddy, and Priyadarshan’s ambitious historical action drama, Marakkar, gearing up for release.

Unveiling the Title and First Look of my new movie 'Monster' directed by Vysakh, scripted by Udaykrishna and produced by Antony Perumbavoor under the banner of Aashirvad Cinemas.
The movie starts rolling today!#Monster #FirstLook @antonypbvr @aashirvadcine pic.twitter.com/MHCb9N7S6o