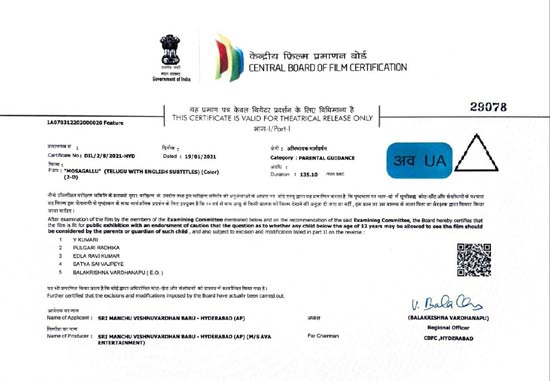 Mosagallu, starring Vishnu Manchu and Kajal Aggarwal as siblings, has wrapped up its censor formalities and received a UA certificate from the CBFC. The film has a short and crisp runtime of 2 hours and 15 minutes. The film is all set for a grand release in a few hours.

Mosagallu is being released in Hindi and also in English. The film is a thriller and its story has been inspired from the world’s biggest IT scam that was unearthed in Mumbai a few years ago. Hollywood filmmaker Jeffrey Chin has directed the movie and Vishnu himself has bankrolled it. Suniel Shetty, Navdeep, Naveen Chandra and Ruhi Singh play key roles in the movie.