Most awaited film’s scenes leaked before release
Published on Nov 7, 2015 9:59 am IST 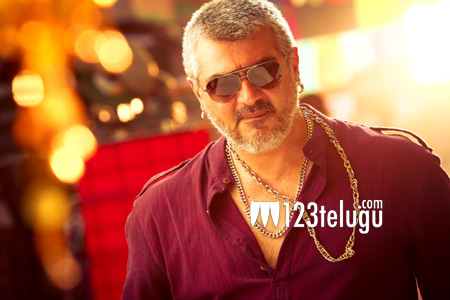 Piracy post release and leakage of scenes, songs and trailers before release are two big threats film producers constantly face during the journey of a film’s release. In the past, films like Atharintiki Dharedhi, Baahubali, Vijay’s Puli etc fell prey to the pre-release leakage menace. Latest star film to join this unfortunate list is Tamil star Thala Ajith’s Vedalam.

Yesterday, the film’s introduction scenes along with a couple of other important scenes were leaked much before the film’s 10th November release. The leaked scenes were even shared on the internet by over enthusiastic fans. Irked by this last minute hassle, producer AM Ratnam approached the Chennai city police to take a stringent action against the culprits.

Meanwhile, Vedalam will be releasing as Aavesham in Telugu. The film has Shruti Haasan as its heroine. Young sensation Anirudh Ravichander is the music composer.