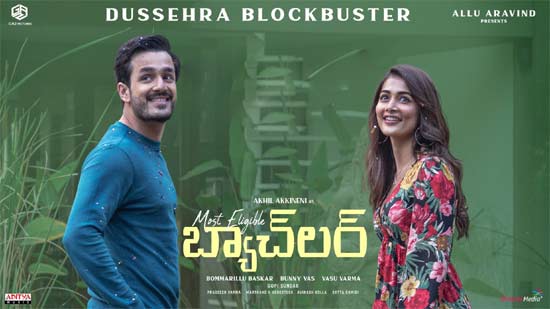 Akhil Akkineni and Pooja Hegde’s Most Eligible Bachelor released last Friday and turned out to be a super hit. The film has collected over Rs 20.5 crore share worldwide and crossed the break even mark within just 5 days of its release. MEB not only revived Akhil’s career but also proved Pooja’s reputation as the most sought-after actress in Tollywood.

According to the latest updates, Most Eligible Bachelor has surpassed yet another milestone. The film ended up grossing $28,694 on its 5th day in the US, taking its 5-day total to $500,006 (Rs 3.74 Cr). With MEB royally entering the half-a-million club, Akhil has consolidated his popularity in the US. The film’s much-needed success also brought its director Bommarillu Bhaskar back into the limelight.

The sizzling chemistry between Akhil and Pooja, Bommarillu Bhaskar’s fresh love story with a unique plotline and Mollywood composer Gopi Sundar’s breezy soundtrack are the main highlights of this Bunny Vas and Vasu Varma joint production.