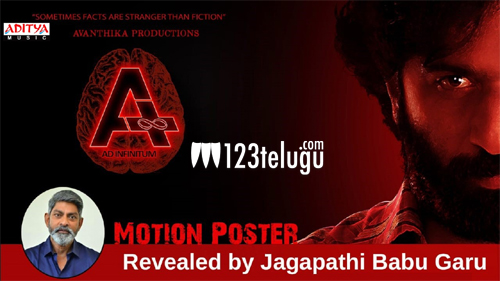 From the past few days, the posters of “A”(AD INFINITUM) is creating a lot of noise in social media. The motion poster was released by Jagapathi Babu today.

Starting from their title look, First Look and motion Poster, the makers have kept things interesting. The team has informed that very soon they are going to release the teaser, which is surely going to surpass the expectations of the audience. The film is being directed by Ugandhar Munia, an assistant of legendary filmmaker Singeetham Sreenivas.

In his debut film itself Nithin Prassana has taken up the challenge of playing 3 distinct roles, and the heroine Preethi Asrani who was seen as next door girl in Malli Rava and Pressure Cooker will be seen, donning a completely different character.