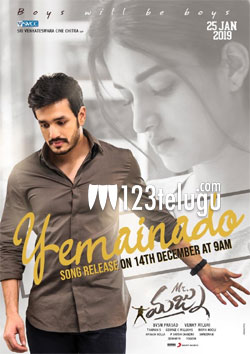 The audio of Mr. Majnu is being awaited all over as Thaman has joined hands with his Tholi Prema director Venky Atluri once again.

The songs of Tholia Prema were super hit and the same is expected of Mr. Majnu as well. The latest we hear is that the first single of the film will be out tomorrow morning at 9 AM.

Niddhi Aggarwal plays a crucial role in this film which has been produced by BVSN Prasad.