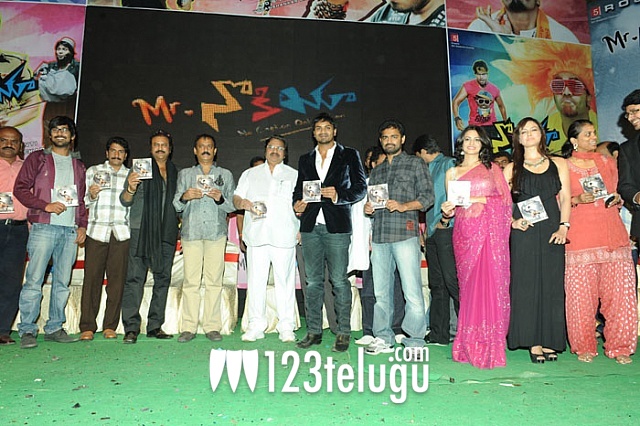 The audio of Manchu Manoj’s upcoming movie ‘Mr. Nokia’ was launched yesterday at a glittering ceremony held near Durgamma Cheruvu in Hyderabad. Along with Manoj, Kriti Kharbandha and Sana Khan, the event was attended by many biggies from the industry including Dr.Dasari Narayana Rao, Raghavendra Rao, Dr. Mohan Babu, Kodanda Rami Reddy and B Gopal. Young heroes Sharwanand, Sunil, Nani and Varun Sandesh were also present. Music for this film was scored by Yuvan Shankar Raja.

Dr.Dasari Narayana Rao unveiled the Audio and Dr. Mohan Babu received the first CD. The trailers of the movie were also released at the venue. Speaking at the ceremony, all the guests wished the team the very best for the movie. Mohan Babu publicly requested Manoj not to indulge in such risky stunts in his future movies.

Dr. Dasari Narayana Rao said that Manoj will score a bumper hit with this film. He also had a word of advice to all the young heroes who were present at the event. “Look for good scripts and do not be afraid to challenge yourself”, said the veteran director.