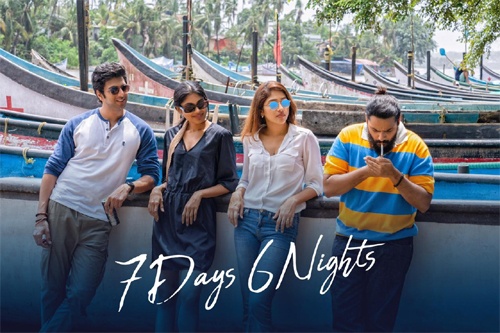 Senior Tollywood filmmaker MS Raju’s passion for cinema needs no introduction. Some of the ambitious projects he had produced in the past reflect his dedication towards filmmaking. Continuing the same passion, even after so many years in the industry, MS Raju has pulled off a challenging schedule in Goa.

For the last few weeks, MS Raju has been shooting his upcoming directorial project, 7 Days 6 Nights, in Goa. The picturesque sea city has been witnessing incessant rain throughout the schedule. However, MS Raju led a 100 member crew and successfully completed a major schedule with 4 cameras.

Being a seasoned producer himself, MS Raju understood the count and cost of a delayed schedule. Thus, following all the safety measures, he finished the entire schedule as per the plan. He is now heading to Mangalore and Udupi for yet another crucial schedule.

Meher Chahal, Rohan and Krithika Shetty and 16 new actors will be seen essaying crucial roles in the movie. The film’s post-production work has begun already, and the second poster will be out soon.

Presented by MS Raju’s Sumanth Art Productions, 7 Days 6 Nights is being produced by his son and noted hero Sumanth Ashwin under Wild Honey Productions banner, with S. Rajinikanth co-producing the film in association with Wintage Pictures and ABG Creations banners.