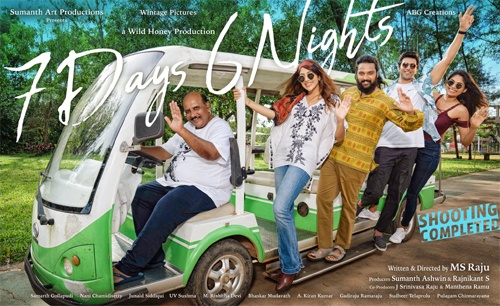 Veteran filmmaker MS Raju has pulled off a record feat amid the COVID-19 pandemic. He has wrapped up the entire shoot of his upcoming youthful entertainer, 7 Days 6 Nights, in less than 2 months. The film, which was announced in April last week, went on the floors on June 21st.

MS Raju and around 100 cast and crew members shot the film in Hyderabad, Goa, Mangalore and Udupi. The film’s post-production work will commence soon followed by its theatrical release. MS Raju is excited about launching his son and noted hero Sumanth Ashwin as a producer through this movie.

Along with Sumanth Ashwin, 7 Days 6 Nights also features a bunch of newcomers in lead roles. Wild Honey Productions, Wintage pictures and ABG Creations banners are bankrolling this project. S Rajinikant is producing the movie along with Sumanth Ashwin. J Srinivasa Raju and Manthena Ramu are the co-producers.