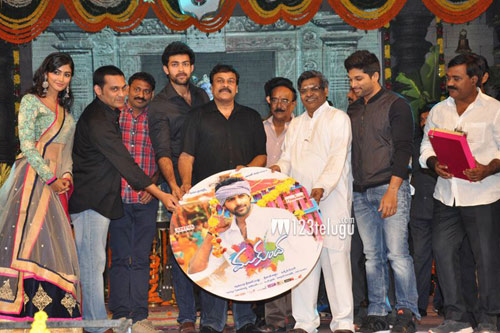 One of the most awaited debuts of the season, Varun Tej’s ‘Mukunda’ had a grand audio launch yesterday. Touted to be a romantic action entertainer with an intense student political backdrop, ‘Mukunda’ has melody specialist Mickey J Meyer composing six different genre songs. The audio launch had Megastar Chiranjeevi as the chief guest, and the songs were released amid few emotional moments and much fanfare.

A short trailer showcasing Varun Tej in various shades has also been released to thumping response from the Mega fans and social media circles. ‘Mukunda’ also achieves a rare feat of having Sirivennela Seetharama Sastry writing all the six beautiful songs in the album. Pooja Hegde pairs up with Varun Tej in this film which is being directed by Srikanth Addala. The film is being produced jointly by
Nallamalupu Srinivas and Tagore Madhu.