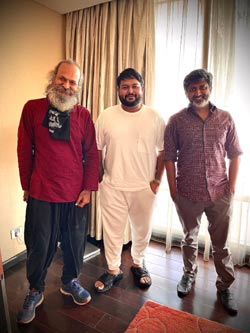 Thaman took to Twitter and tweeted a photograph of him posing with Mohan Raja and Godfather’s cinematographer Nirav Shah. The makers have kept the names of the actors who will be portraying important lead roles under wraps. This official remake of the acclaimed Malayalam political drama, Lucifer, is being produced by Ram Charan in association with NV Prasad and RB Chowdary.