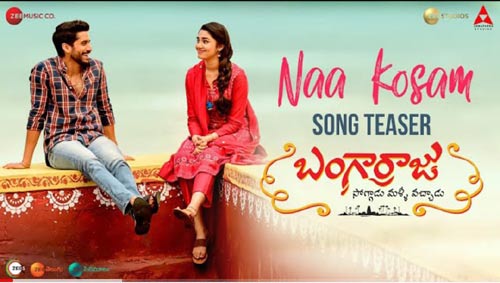 Bangarraju is the spin-off to King Nagarjuna’s 2016 blockbuster Soggade Chinni Nayana. Today, a promo of the second song, Naa Kosam, was released by the makers.

The song is sung by the most happening singer Sid Sriram. Music director Anup Rubens composed this love track. The promo is as cool as the song, picturized on Naga Chaitanya and Krithi Shetty.

Naa Kosam full audio song will be released at 05:12 PM on 5th December 2021. The first track ‘Laddunda’ from Bangarraju, released a few weeks ago, has already received a good response from the masses.

Ramya Krishna is playing the love interest of Nagarjuna in this fantasy drama film directed by Kalyan Krishna and the movie is scheduled to release on 15th January 2022.