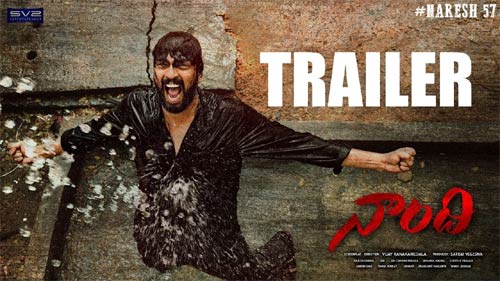 It is a known fact that Allari Naresh is doing a film called Naandhi. For the first time, he has left his fun image and is trying to showcase something new with this film.

The posters created a lot of noise early and now the makers have released the trailer of the film. By the looks of it, the film is going to be an intense drama filled with riveting emotions.

Allari Naresh makes a stunning transformation and is seen as a victim who has been pushed into jail for a murder trial. All this is established so well in the trailer through gritty dialogues and solid visuals.

Varalakshmi Sarathkumar and Srikanth Iyengar are shown as lawyers who are fighting this case. The family emotion, Naresh’s raw and intense avatar look solid. The BGM and Naresh’s dialogues reveal that he is here to get justice at any cost.

The promo and the dark theme of the film look gripping and give an idea that Naresh is facing trouble for a crime that he has not done. Directed by Vijaya Krishna, this film is produced by Satish Vegensa.