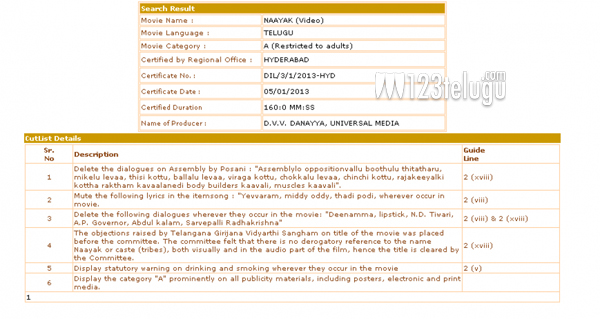 As we have earlier reported that Mega Power Star Ram Charan’s mass entertainer ‘Naayak’ has received an A certificate from the censors, now we present you the complete censor cut details for which this movie was given an A. Seen here in the above picture are some details pertaining to some foul language and other disturbing material.
The movie has a good amount of action, glamour and mass dialogues. V.V. Vinayak is the director of the movie and Thaman has composed the music. Key portions of the movie have been shot in Kolkata and Charan will be seen as a leader. Danayya DVV is the producer of the film and Naayak is being readied for a January 9th release.