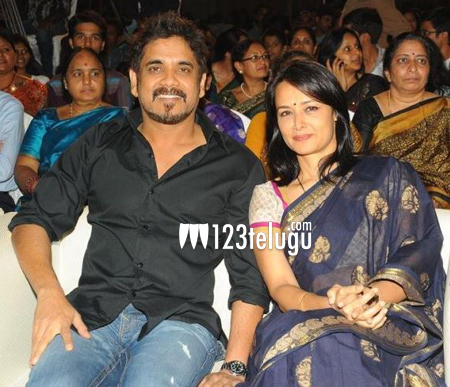 The ever romantic at heart, Nagarjuna, dedicated a new single from his upcoming home production, Nirmala Convent, to his wife Amala on her birthday. The charming actor took to Twitter to wish his wife on this special day saying, “To the LOVE OF MY LIFE Amala,HAPPY BIRTHDAY dedicating a song from Nirmala convent to her/so many ways to love.”

The song, titled ‘Okosari O Muddu’, is a lighthearted romantic number that explains about the various ways of expressing love. Nirmala Convent marks the debut of the actor couple Srikanth and Ooha’s teenage son Roshan as a hero. The film stars Shreya Sharma in the female lead. Shreya earlier acted as Samantha’s sister in Dookudu.

The film’s shooting is nearing completion and the post-production formalities will kickstart soon.