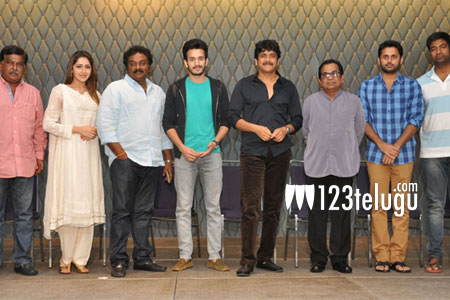 Senior Akkineni hero Nagarjuna in a press meet yesterday showered praises on his son Akhil for giving an impeccable performance in his debut film as a hero, Akhil. A visibly thrilled Nag said that he would give a 5-star rating for Akhil’s debut performance.

The doting father went on to say that if Akhil stunned everyone with his acting, dances and fights in his first film, one can imagine how his performance will be after 10 films. Nag thanked the Akkineni fans who lapped up his son despite being hurt with the delay in the film’s release.

Nagarjuna also lauded the debut actress Sayyeshaa Saigal for putting up a commendable performance even though she could not speak Telugu. Directed by VV Vinayak and produced by actor Nithiin, Akhil was released on Diwali and the film is running successfully allover.