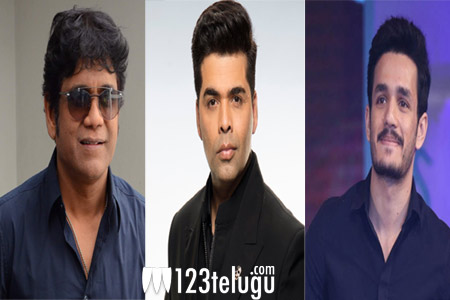 Akhil’s Bollywood debut has been one of the hottest topics in the media for the last couple of years. There were constant reports that Hotshot Bollywood filmmaker Karan Johar will be introducing Akhil in Bollywood. But there has been no official announcement till date.

Breaking the silence at last, Nagarjuna opened up about Akhil’s Bollywood entry. He said that although Karan has been quite keen on launching Akhil in Bollywood, he politely refused Karan’s proposal as he felt that Akhil has to first learn his craft Tollywood so that he will be prepared for Bollywood.

Nag went on to reveal that he had asked Karan to produce a film with Akhil in Tollywood and then remake it in Bollywood. Just how he himself was introduced in Bollywood with Shiva’s Hindi remake nearly 3 decades ago.