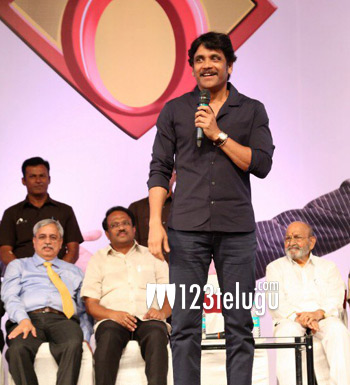 Yesterday, Nagarjuna took part in an organ donation drive organized by a private hospital in Hyderabad. Requesting everyone to pledge their organs on this occasion, Nag revealed two interesting stories about his introduction to organ donation.

Firstly, Nag revealed an incident that happened when he was just 23. Nag said that he was heading back to his home, riding his bike at a jet speed after watching a late night film. Someone telephoned Nag’s parents and informed them about it.

When he reached home, Nag’s mother Annapurna scolded him for riding the bike speedily. However, ANR calmly told Nag that he must donate his organs as they will be useful to someone when he dies in a bike accident. ANR later took his entire family and made them pledge their organs.

The second instance, Nag recollected, was when he underwent a leg surgery in the US some 15 years ago. Nag revealed that his entire leg had to be reconstructed and that doctors used a donor’s parts for Nag’s leg. Nag said that his leg is absolutely fine since then and that he always thanks the anonymous donor. Nag further revealed that ANR donated his pacemaker during his death.