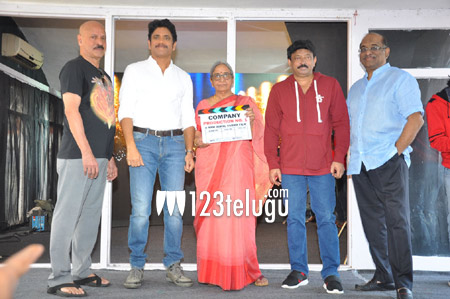 The most eagerly awaited NAGRGV4 film from the duo that gave the iconic Siva has been launched in style in a specially designed set this morning. RGV’s mother sounded the first clap at the inaugural ceremony that took place at Annapurna Studios.

Nag seemed quite confident about the unique script narrated by RGV. Nag said that this film is a result of the mutual trust between him and RGV and exuded confidence on the movie, saying that this film will set a new trend across the country with its high-standards in technicalities.

The first schedule’s shooting will be held for 10 days in November. After a brief gap for Akhil’s Hello’s promotions, the shoot will resume from December 22 and the entire film will be wrapped up in a continuous schedule. The makers have clarified that this film is not a sequel to Siva. More details about the film’s cast and crew members will be announced soon.