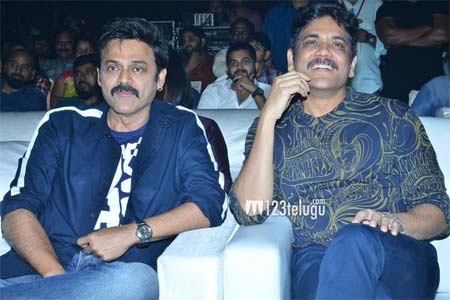 The theatrical trailer for Naga Chaitanya and Samantha’s upcoming romantic drama, Majili, released at the film’s pre-release event last night. The trailer has impressed fans and assured an emotional ride in cinemas this summer.

Speaking at the pre-release event, senior heroes Nagarjuna and Venkatesh were all praise for Majili’s trailer. Nag said that he had tears in his eyes while watching the trailer and exuded confidence in the film’s success. On the other hand, Venky said that Chay and Samantha look and act wonderfully in movies like Majili and that he is sure that the film is going to be wonderful.

Majili, directed by Shiva Nirvana, also has Divyansha Kaushik, Rao Ramesh and Posani in key roles. Harish Peddi and Sahu Garapati have produced the movie. Majili is scheduled to hit screens on April 5, as a Ugadi festive treat.