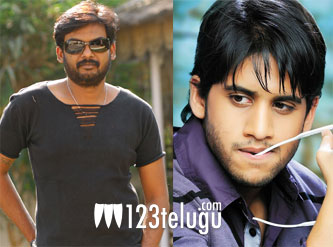 Naga Chaitanya and Puri Jagan will soon be working together for a new film and the buzz is that this film will go onto the sets from March 25th 2012. Naga Chaitanya was reportedly extremely excited by the story narrated by Puri Jagan. Venkat of R.R.Movie Makers would be producing this movie.

Puri will begin work on this movie after he completes ‘Businessman’ and starts work on a new project with Young Tiger NTR. A hot and popular young actress has been approached to play the lead role opposite Naga Chaitanya.

An official announcement with the full cast and crew will be out soon, say Filmnagar sources.