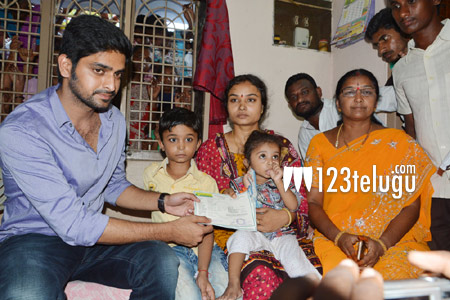 Young actor Naga Shaurya, who acquired a decent fanbase among the young moviegoers, impressed everyone with his noble gesture towards the family of an Indian Army soldier named B Satyam, who was killed in a gun battle with Pakistan terrorists in Jammu and Kashmir.

Yesterday, Naga Shaurya went to Bobbili in Vizianagaram district and met the late soldier’s wife and children and handed over Rs. 50,000 to them. Speaking to the media, the young hero said that he has been doing social service and charity works with his father Sankara Prasad’s inspiration.