Nagarjuna – Bangarraju will offer more than what audiences imagined
Published on Jan 10, 2022 10:09 am IST 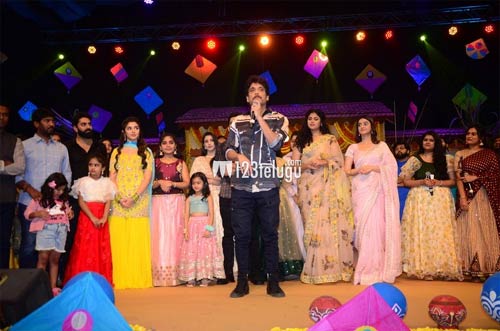 Akkineni Nagarjuna and Naga Chaitanya-starrer Bangarraju, is all set to release on January 14, 2022. Ahead of that, A special musical event was grandly held last night.

During the event, Nagarjuna said that January 14 is an important day for Annapurna Studios because it was founded on the same date. He also mentioned that his father, legendary actor Akkineni Nageswara Rao’s Dasara Bullodu was released 50 years ago on the same day and it is a musical blockbuster.

Speaking about Bangarraju, Nagarjuna promised that the movie will offer more than what audiences imagined. It seemed that the actor is so confident about the success of the family entertainer.

Directed by Kalyan Krishna, the movie has Ramya Krishnan and Krithi Shetty as the female leads. Anup Rubens scored music for this film which is releasing this Friday.