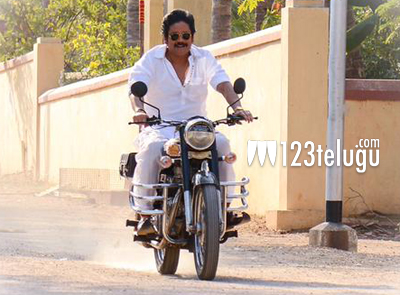 We have reported earlier that Akkineni Nagarjuna is busy with a project titled Soggade Chinni Nayana. This movie is touted to have an angle of socio fantasy included in it. Nagarjuna will be seen in dual role, as a grandfather and his grandson. The shooting of this film is going on at a brisk pace from the past few weeks.The unit has recently wrapped up its shoot in Mysore.

As per the latest update, a schedule has begun today at the the Ramoji Film City. Some keys scenes involving the whole cast are being shot in this schedule. Ramya Krishna and Lavanya Tripathi are playing the female leads in this flick which is being directed by debutante Kalyan Krishna. Anoop Rubens is scoring tunes for this film.

Nagarjuna himself is producing this project under the Annapurna Studios banner.