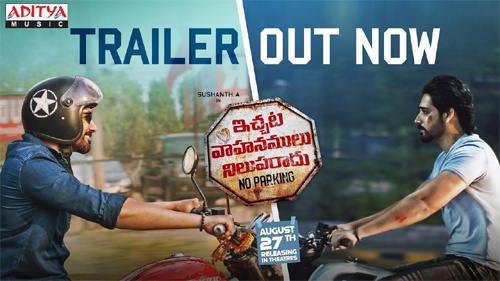 King Nagarjuna released the theatrical trailer of Sushanth’s Ichata Vahanamulu Niluparadu today. The film has completed all the formalities, including censor and it is due for release on 27th of this month.

The trailer looks promising with an intriguing story and engaging narration. It’s a complete package as it has all the commercial elements. Though it’s his first film, director S Darshan has handled the film quite convincingly.

The trailer unveils the film’s plotline, though it doesn’t disclose the incident that landed Sushanth in troubles. Sushanth is superb in the highly energetic role, while Meenakshi looks pretty as his colleague.