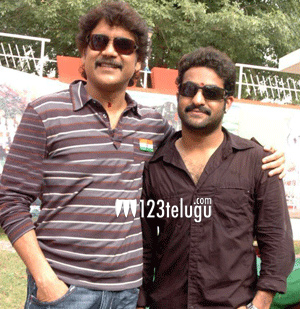 A Nagarjuna – NTR multistarrer movie has been making rounds since quite some time now. Nagarjuna has reportedly confirmed in an interview that he would be starting this film in August.

Vamsi Paidipally, who previously directed Munna, Brundavanam and Yevadu is set to direct this film. Nagarjuna has earlier teamed up with Hari Krishna, father of NTR for Sitaramaraju. Prasad V Potluri will be producing this film.

Nagarjuna is currently busy with the promotions of Manam while NTR is busy with ‘Rabhasa’. This combination has generated a lot of interest among cine lovers.