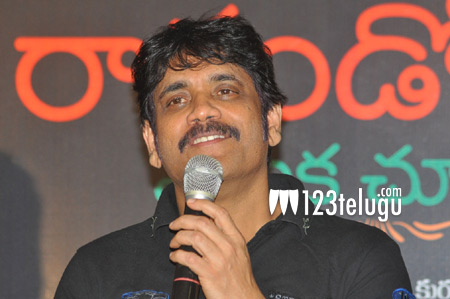 Naga Chaitanya’s latest family drama RaRandoi Veduka Choodham, which released on May 26, registered the best openings in the actor’s career. In the US too, the film grossed more than Rs 1 crores from its premieres and Friday screenings. Directed by Kalyan Krishna, the film had Naga Chaitanya and Rakul in lead roles, whereas Nagarjuna produced the film under Annapurna Studios banner.

Talking about the film’s success, Nagarjuna said, “I’m thrilled that the film has become such a big hit and I thank everyone, particularly the family audience, for owning its up. We have been waiting to hear this for more than a month. Kalyan Krishna, Satyanand and GK Mohan stood as the backbone of the film. I’m going to say this once again – My hero (Naga Chaitanya) is super.”

The actor revealed that he’s going on a holiday with his family and once he comes back, he’ll think about Akhil’s film, his proposed project with Kalyan Krishna and on top of this, he has to complete the shoot of Raju Gari Gadhi 2.