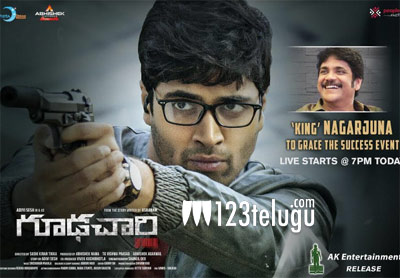 After a solid first weekend, Adivi Sesh’s super hit spy thriller, Goodachari, is having a study done during the weekdays. To celebrate the film’s success, Goodachari’s team is organising a grand event this evening in Hyderabad.

Hero Nagarjuna will be gracing Goodachari’s success function as the chief guest. Recently, Nagarjuna took to Twitter and heaped praises on Goodachari’s team, calling the film a must watch. Nagarjuna’s gesture had won everyone’s hearts as Chi La Sow, the film which he has presented, is also running in theaters along with Goodachari.