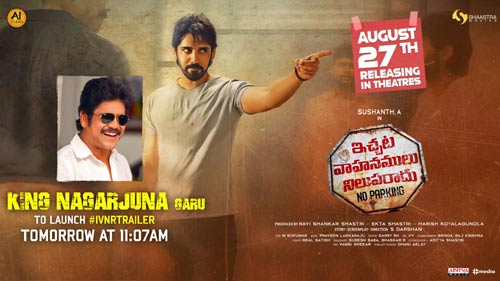 Hero Sushanth’s Ichata Vahanamulu Niluparadu is gearing up for release on August 27. The film is touted to be a n intense thriller based on real incidents. Bollywood starlet Meenakshi Chaudhary is making her Tollywood debut with this film.

IVNR’s team has just announced that the film’s theatrical trailer will be released by Sushanth’s uncle and star hero Nagarjuna tomorrow (Aug 23) at 11:07 AM. The film is directed by debutant S Darshan and produced by Ravi Shankar Shastri, Ekta Shastri and Harish Koyalagundla on AI Studios and Shaastra Movies banners.