Nagarjuna’s gets terrific response from industry
Published on Sep 7, 2012 9:24 am IST 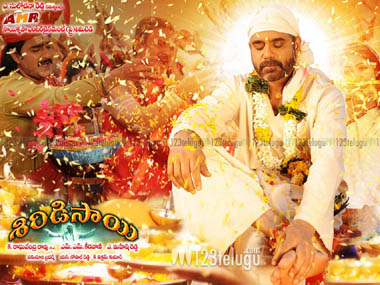 Akkineni Nagarjuna’s performance as Shirdi Sai Baba has been receiving rave reviews from all corners and the film is being widely appreciated by those who have seen it. Terrific response has been coming in from the industry over Nagarjuna’s portrayal of the role.

While ace director S.S. Rajamouli has been vocal about it on Twitter, many senior directors and producers have been heard raving about Nagarjuna’s performance in the Filmnagar area. “For someone with such a romantic image, transforming so seamlessly into a devotional role is incredibly difficult”, is the common remark being heard. With a superb word of mouth and support from family crowds expected to come in a big way, ‘Shirdi Sai’ looks all set to be a major milestone in Nagarjuna’s career.

The movie has been produced by A. Mahesh Reddy and Keeravani has composed the music. K. Raghavendra Rao is the director of the movie.