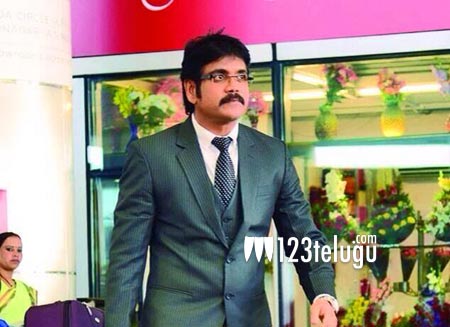 Nagarjuna’s upcoming film Manam is gearing up for release later this month. Directed by Vikram Kumar, the film also stars ANR, Naga Chaitanya, Shriya Saran and Samantha in lead roles. Nagarjuna himself is producing the film under Annapurna Studios banner.

Recently, one of Nagarjuna’s photographs from the film surfaced on social networking sites and his new avatar, where he’s seen as a professional, has received good response. In fact, some people have started making comparisons to Nagarjuna’s look in Manamadhudu and how he’s still one of the most handsome actors in Tollywood. The film’s story has been kept under wraps; however, the presence of ANR, Nagarjuna and Naga Chaitanya has people got all excited about what Vikram Kumar has done.

Anup Rubens has scored the music and P S Vinod is the cinematographer. Rajeevan is the art director of this feel-good entertainer. Reliance Entertainment is co-producing the film.