Nagarjuna’s Wild Dog gets a thumping response on OTT: Trends atop on Netflix
Published on Apr 24, 2021 11:13 am IST 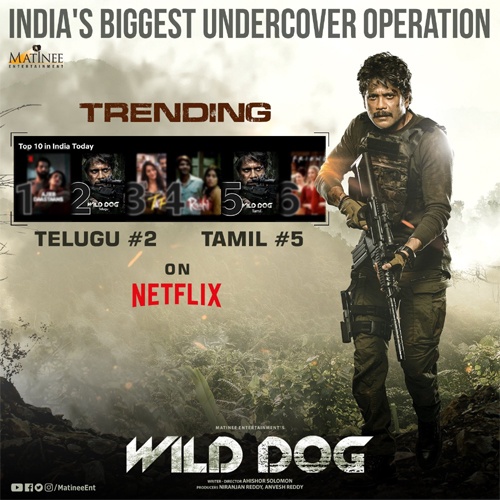 Hero Nagarjuna’s high budget action thriller, Wild Dog, released on April 2nd amid a lot of expectations. Directed by debutant Solomon, the film had received a decent response from fans and critics alike. Nag played the role of an NIA agent in the movie.

Wild Dog had its OTT premiere on the digital giant Netflix a couple of nights ago. The film’s story is set in the backdrop of the Hyderabad bomb blasts that occurred nearly a decade ago. Since the film is set in terrorism backdrop, the pan-Indian audience could connect to it and the film has received a thumping response upon its digital premiere.

Wild Dog has released in all the four major South Indian languages. While the Telugu version is trending atop the Tamil version is trending at number 5th spot in terms of highest views in a short time. Also starring Bollywood actresses Dia Mirza and Saiyami Kher, Wild Dog has been bankrolled by Niranjan Reddy. Rich production values and thrilling action sequences are the other major highlights of Wild Dog.