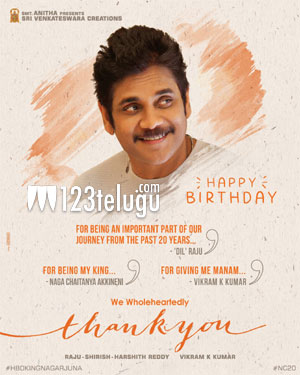 It is a known fact that Akkineni Nagarjuna is celebrating his birthday today and many announcements are being made one after the other. We had already reported that Chay Akkineni will be doing a film in the direction of Vikram Kumar soon.

The project has been officially announced today and it has been titled Thank You. Touted to be an endearing drama, this film will be produced by Dil Raju. The film’s female lead will be announced soon.

Chay is acting in a film called Love Story that will be completed in the next few days and now the talk is that this film will go on floors by this year-end. The poster looks vibrant and the makers thank Nagarjuna on his special day.