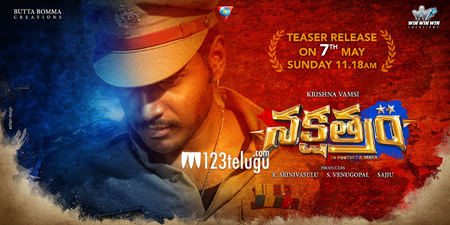 Months after Krishna Vamsi started off shooting his ambitious film Nakshatram, he’s finally gearing up to show a glimpse of what he has created this time. Touted as an intense action drama, the film has Sundeep Kishan and Regina playing lead roles, along with Sai Dharam Tej and Pragya Jaiswal.

The first teaser of the film is going to be unveiled on May 7, on the occasion of Sundeep Kishan’s birthday. The action will be seen playing a cop and the film is supposed to have plenty of risky stunts, which were extremely well-choreographed.

The film will also feature a special song by Shriya Saran. Nakshatram is said to be one of the biggest budgeted films in Sundeep Kishan’s career and it’ll hit the screens later this year.