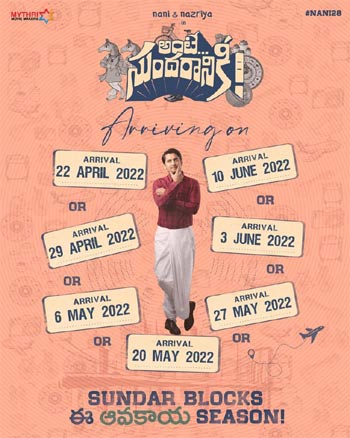 It is a known fact that Nani is doing a film called Ante Sundaraniki that is a breezy comedy. The film has also wrapped up the shooting part and the makers revealed it a few days back.

In a fresh announcement today, the makers have revealed that they have blocked seven dates for their release. They are April 22nd, April 29th, 6th May, 20th May, 27th May, 3rd June, and 10th June.

In a funny way, they have revealed that they will leisurely reveal the release date among the above option with the caption Full Avakaya Season manade.

Ante Sundaraniki has talented young Malayalam actress Nazriya Nazim as the female lead. This is the first time that she is romancing Nani in Telugu and his chemistry with Nani is going to be super special as per the news.

Directed by Vivek Athreya, the film is produced under the Mythri Movie Makers banner. Watch this space for more updates on this project.