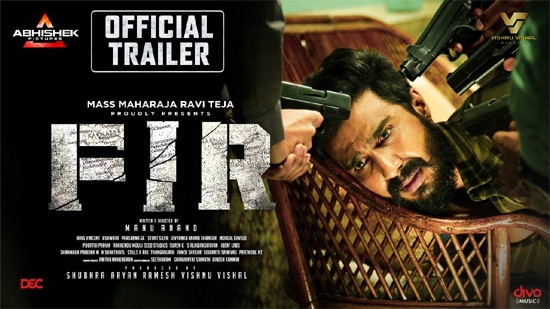 Natural Star, Nani has released the Telugu trailer of Vishnu Vishal’s upcoming movie, FIR. Written and directed by Manu Anand, the movie is all set to hit screens on February 11, 2022.

The trailer showcased Vishnu Vishal in a new avatar. The well-cut trailer is a pack of action sequences and thrilling moments. It has seemed that Irfan Ahmed (Vishnu Vishal) is framed as a terrorist and the suspicious Police took him into custody. Is he really a terrorist? What Irfan do next? To know answers, we all need to wait until next Friday.

The engaging trailer has Manjima Mohan and Gautham Vasudev Menon as a lawyer and an investigation officer, respectively. Raiza Wilson and Reba Monica John are seen in pivotal roles. The background score by Ashwath is one of the key reasons in making the trailer looks intriguing.

Produced by Vishnu Vishal Studioz, the movie, presented by Ravi Tej, will be released in Telugu by Abhishek Pictures.