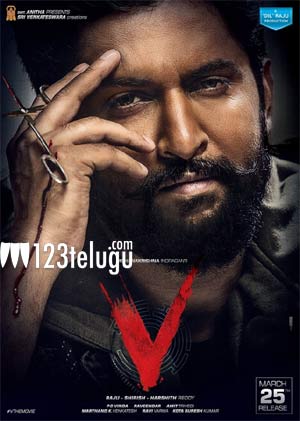 After launching Sudheer Babu’s look yesterday, the makers of Nani’s much-awaited silver jubilee film, V, unveiled his first look this morning. The poster showcases Nani in a bearded avatar, with a twirling moustache adding to his attitude. The bloodstained scissors in Nani’s hands makes the poster intriguing on the whole.

By now, it’s well known that Nani will be seen in a negative role in V. He has teamed up with director Mohanakrishna Indraganti, who had also directed Nani’s debut film, Ashta Chamma. The film is touted as an action thriller and expectations are quite high on this project.

Dil Raju is producing V. Aditi Rao Hydari and Nivetha Thomas are the leading ladies in the movie, which is slated to release on March 25.