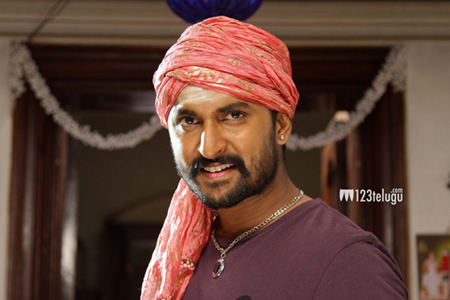 Nani’s upcoming film Janda Pai Kapiraju is gearing up for release in late January, as per the latest buzz in the industry. The film’s shooting was wrapped up last week in Hyderabad after a long schedule in Ramoji Film City. Nani and Amala Paul have played the lead roles in this film and for the first time in his career, Nani will be seen in dual roles.

Sarath Kumar is playing an important role in this film and he’ll be seen as a CBI officer. The film is an action entertainer and Nani’s avatar as Maya Kannan, a Tamilian who’s brought to Andhra Pradesh, is said to be one of the highlights of the film. Nani is said to have changed his body language completely for his role and he even shaved his head to suit the character.

Ragini Dwivedi, Shiva Balaji, Vennela Kishore, Dhanraj and Ahuti Prasad have played important roles. G V Prakash has scored the music and Sukumar is the cinematographer. The audio is expected to hit the stands later this month. Samuthirakani has directed the film and K S Srinivasan has produced it under Vasan Visual Ventures banner.