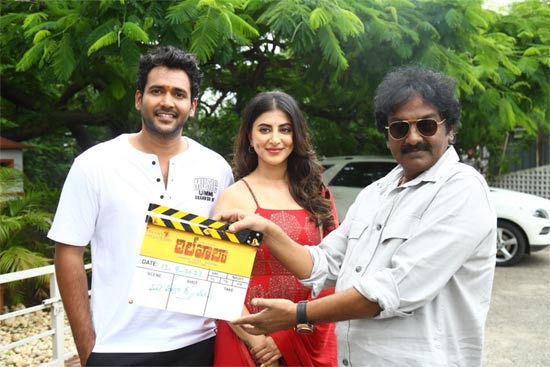 Young hero Naresh Agastya who acted in the films Mathu Vadhalara and Senapati will be next seen in Veerabhadram Chowdary’s film Dil Wala. Veerabhadram is known for his superhits like Poola Rangadu, and Aha Naa Pellanta. Swetha Avasthi is the leading lady.

Yesterday the film commenced its shoot with a pooja ceremony. Director VV Vinayak gave the first clap, and hero Allari Naresh handed over the script. Ali switched on the camera.

Director Veerabhadram thanked all the special guests for attending the opening ceremony. He thanked Naresh Agastya for accepting this script as soon as he narrated it. Director mentioned that the shoot will start in September and will be wrapped up soon.

Naresh Agastya said that he is doing a commercial film for the first time and promised to give his complete effort. Producer Nabishaik said he is getting introduced as a producer with Dil Wala and added that he will produce it without any compromise.

Billed to be a crime comedy, the movie is bankrolled together by Thumu Narsimha Patel and Nabishaik under Deccan Dream Works and Jayadurgadevi Multimedia banners. Melody specialist Anup Rubens will compose the music.