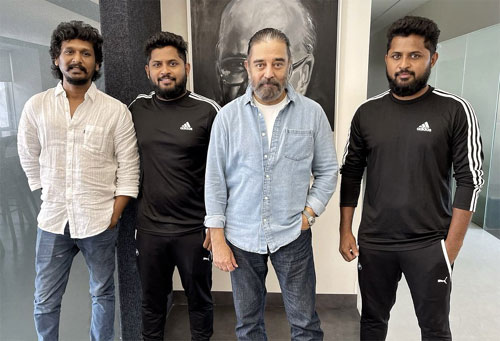 Now that the COVID cases are coming down across Tamil Nadu, filmmakers are fast wrapping up the pre-production formalities to resume film shootings. Stalwart actor Kamal Haasan and star director Lokesh Kanagaraj too are busy with the pre-production of Vikram, one of the most eagerly awaited Kollywood biggies. The film’s shoot is expected to commence in a couple of months.

This evening, Lokesh took to Twitter and tweeted a picture of him posing with Kamal and National award-winning stunt co-ordinators duo, Anbariv. Lokesh welcomed the twin brothers onboard Vikram. Anbariv, who won the National Award for Best Stunt Choreography in KGF Chapter 1, will be designing some high voltage action sequences in Vikram, which is touted as an out-and-out action thriller.