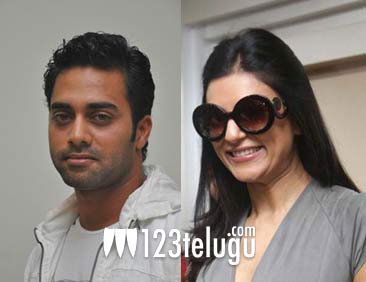 Actor Navdeep is all set to join hands with former Miss Universe Sushmita Sen for a new talent hunt to find new faces for TV. This is going to be the first ever female beauty pageant exclusively for South Indian TV. “We happy to announce the official colloboration between raw production house owned by mr navdeep and mr rajshekar and i am she. .. Rph is the official event manager for i am she finals in hyd this year and also that rph is coming up with the first ever female beauty paegant exclusively for south indian tv throughout the four south states… Rph will be having auditions in the major south cities and will be selecting ten girls from each city and take them to an exotic location outside india and have a series of grooming and competitive tasks and shortlist two girls from each city for the finals to be conducted back in india.

The winner of siah will have a direct entry to i am she 2013 finals which is directly taking her many steps closer to her miss universe dream,” Navdeep posted on Twitter. He announced more details about this beauty pageant at the press conference of ‘I Am She’ which is a brain child of Sushmita Sen. The competition is going to be held in Hyderabad on September 21 and the winner of ‘I Am She’ is going to represent India at the Miss Universe beauty pageant.