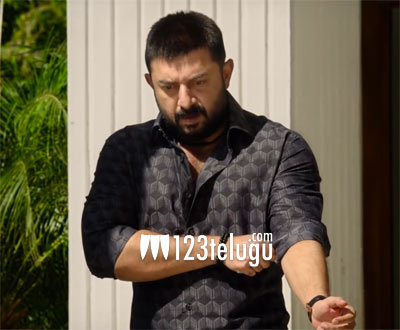 This morning, Nagarjuna unveiled the strikingly impactful theatrical trailer for master director Mani Ratnam’s most eagerly awaited crime drama, Nawab. Going by the terrific trailer, it looks like Mani Ratnam will be back with a bang when the film hits theaters on September 28.

Nawab’s intense and racy trailer showcases the corrupt empire of a dreaded industrialist named Bhupathi Reddy, played by a menacing Prakash Raj, and his three sons – Arvind Swami (Varada), Arun Vijay (Thyagu) and Simbu (Rudra). The trailer is loaded with elements of family emotions and the bond between the three brothers in a struggle for power.

The surprise package in Nawab’s trailer is Vijay Sethupathi as Rasool, who plays a corrupt policeman with an immense greed for power. His friendship with Varada and the betrayal in the end is something that has to be watched out for. The trailer also introduces the women in Nawab – Jayasudha, Jyothika, Aditi Rao Hydari, Aishwarya Rajesh and Dayana Erappa.

AR Rahman comes up with a pulsating background score. The racy cuts add to the adrenaline rush in the trailer. Ace DP Santosh Sivan’s rustic visuals give the perfect vibes. Stay tuned for more updates on this much-awaited thriller.