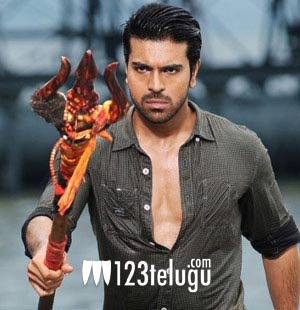 Ram Charan, Kajal and Amala Paul starrer Nayak is gearing up for its massive release in January and the post production is going on in full swing these days. The film’s audio is going to be launched on December 14 in Shilpa Kala Vedika and music director S S Thaman has completed the audio’s final mixing earlier today. The much hyped remix of Shubalekha Rasukunna is going to be a major highlight of the album and Thaman is very excited to see how the response to the album will be. Nayak is a mass entertainer and Ram Charan will be seen in a dual role. It’s the first time Thaman is scoring the music for a Ram Charan’s film. V V Vinayak has directed the film and DVV Danayya is the producer. The film is all set to hit the screens on January 9, 2013.