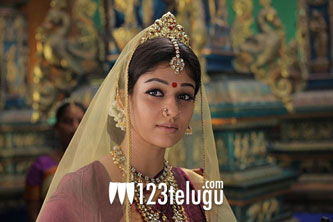 Nov 18th is Nayanatara’s Birthday and she has received the gift of a life time in the form of Sri Rama Rajyam. The movie, which hit the screens yesterday, has been earning some rave reviews and special mention is being made about Nayanatara’s extra-ordinary performance. Already, cine pundits are predicting multiple awards for her portrayal of Sita.

For all we know, this might be Nayanatara’s final project and she has reserved her career best performance for the last. Born into a Malayalee Christian family in 1984 as Diana Mariam Kurian. She made her debut in Malayalam in the year 2003. Her biggest break and claim to fame came with Super Star Rajinikanth’s ‘Chandramukhi’ in 2005. That film firmly established her career in both Tamil and Telugu and she went on to become one of the leading actresses of her time.

Nayanatara converted to Hinduism in August and her screen name Nayanatara became her official name. She is all set to marry dancing legend Prabhu Deva next year.