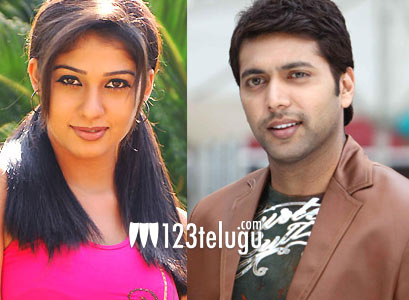 Nayanthara is easily one of the most sought after actresses in Tamil cinema these days. Ever since her recent films, Arrambham and Raja Rani became huge hits, she has sent a strong message to her critics that she is still a force to reckon with.

Recently, she wrapped up shooting for her upcoming bilingual film, Anamika. Sekhar Kammula has directed this film and it’s expected to release in February, 2014. The latest news is that she has joined the sets of one of her next Tamil films in Chennai. This untitled film is being directed by Jayam Raja and Nayanthara is paired up with Jayam Ravi, who has just wrapped up shooting for the Tamil version of Jenda Pai Kapiraju.

Devi Sri Prasad will be scoring music for this untitled film. Since this is the first time Nayanthara is teaming up with Jayam Ravi, trade circles in Kollywood are eagerly awaiting to see how this film shapes up. On the other hand, Nayanthara will also be seen in B Gopal’s upcoming bilingual film and she’s playing Gopichand’s romantic interest in this action drama.