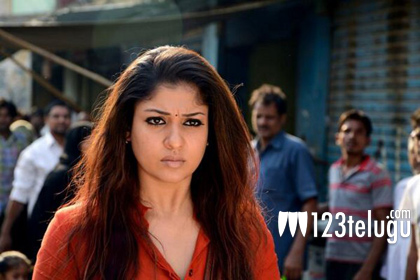 Nayanthara is finally set to join the sets of Sekhar Kammula’s upcoming film Anamika. For the past couple of months, she had been busy with her other commitments in Telugu, Tamil and hence, she couldn’t allot dates for Anamika. Sources close to the film unit have informed us that Nayanthara will be joining the shooting in Hyderabad from tomorrow and the entire film will be wrapped up by the end of the month.

Recently, Nayanthara was in Pollachi where she had been shooting a song for her upcoming Tamil film Idhu Kathirvelan Kadhal. She has been paired up with Udhayanidhi Stalin in this romantic comedy. Now that she’s joining the shooting of Anamika, Sekhar Kammula and his team are speeding up the post-production process as well.

Anamika is a bilingual film and it’ll be released in Telugu and Tamil. Nayanthara, Vaibhav Reddy, Harshvardhan Rane have played the lead roles and it’s the remake of Vidya Balan starrer Anamika. M M Keeravani has scored the music. Endemol India, Logline Productions and Select Media Holdings have produced the film.