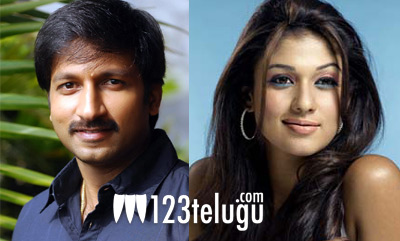 Nayanthara is on a signing spree to make up for all the lost time. After signing Nagarjuna, Dasarath’s film and Rana starrer Krishnam Vande Jagadgurum, she has signed a new bilingual film which has Gopichand in lead role. Bhoopathi Pandian is going to direct the film in Telugu and Tamil. Thandra Ramesh is going to produce the film on Jayabalaji Real Media Pvt. Ltd. Interestingly, this is the first Tamil film which Nayanthara has officially signed after she decided to make a comeback to films post Sri Rama Rajyam. This untitled film also marks the debut of Gopichand in Tamil. Thaman is going to compose the music for this film.